Being a Black Teacher in America Today

Like many Black Americans, I have experienced racism my entire life. I have been followed while casually browsing in stores. My brothers have been thrown to the ground by police and by white neighbors. I have been denied entry to restaurants. These humiliating and painful moments are etched on my soul. The nonstop cadence of violence against Black people in America makes clear that the bigotry I have known since my childhood continues uninterrupted.

Last week, a man casually put his knee on the neck of another man. It was so casual that he kept his hand in his pocket. He let him die without a care in the world, bolstered by his whiteness and privilege and by a system he expected would not hold him to account.

The murders of George Floyd, Ahmaud Arbery, and Breonna Taylor have brought us to a righteous boiling point, but the anguish and pain have been with us for centuries, simmering in the daily injustices we suffer. These senseless killings, and related incidents like the encounter in Central Park, upset me not only as an empathetic human, but also because they are needless, painful reminders of indignities that I face daily. When I’m with people who know me, I’m a respected colleague, board member, friend, volunteer, neighbor, and more. But once outside of those insulated bubbles, I’m an anonymous Black woman subject to diminished respect and trust. It is absolutely exhausting.

We know the statistics on the disproportionate impact that racism has had on Black Americans. Black Americans are two-and-a-half times more likely than whites to be killed by police. We are two-and-a-half times more likely to live below the poverty line. We are more likely to attend high-poverty schools — nearly half attend schools in which 75% qualify for free and reduced lunch. We are disproportionately punished. Black people make up 24% of the public school population but comprise 48% of students suspended. We are incarcerated at more than five times the rate of white people. In this pandemic, at three times the rate of White Americans, we are dying.

When will we take the actions truly required to eliminate these racial inequities?

As a Black woman, I have fought my entire life against the poisonous narrative that I am less than — and deserve less than — because of my skin.

As a teacher, I have dedicated my life to writing a different narrative for all our country’s young people, helping them work toward success and power regardless of race or economic background. But I can tell you with grave certainty and sincere horror that it is harder for black and brown people to succeed because of racist systems in which we live; systems that tell us, over and over again, that we cannot.

As a Black woman, I am indignant. I am outraged at a system that allows and supports  the casual destruction of black and brown bodies, lives, and families.

At the National Board for Professional Teaching Standards, I have the privilege to work towards a future where every student in every school has access to an accomplished teacher every day. Board-certified teachers are equipped to support the next generation, to advocate for those whose voices are silenced, and to rally against the bias and stereotypes that discourage the dreams and paralyze the potential of young people. Board-certified teachers educate students to the profession’s highest standards. We endlessly strive to uncover, interrogate, and address the prejudices plaguing our social systems. We fight misunderstanding, bullying, discrimination, dehumanization, and violence. We work to ensure students feel entitled to the pride they have in their roots, their personal identities, and their communities. Board-certified teachers are committed to social justice, to instilling in students the power and agency to claim control of their lives. We develop in our students a celebration of diversity in the human condition, connection with others especially across lines of difference, and adaptation in the face of adversity.

“You must never confuse faith that you will prevail in the end—which you can never afford to lose—with the discipline to confront the most brutal facts of your current reality, whatever they might be.”   – James Stockdale

I am a Black woman, and I chose to be a teacher. I believe that educators have the power to lift up students who have been taught to stay down, and teach the value of difference in a society that too often uses difference to divide. Educators play the vital role of helping the next generation understand the realities of this world as it is, while also teaching them how to imagine and fight for how it should be.

I urge you to open your minds and do the same. I urge you to take the anger being voiced seriously and evaluate the ways you perpetuate racism. I pledge to never stop helping to create a country that brings these challenges to light and drives positive change. For all students and for all Americans. Join me. 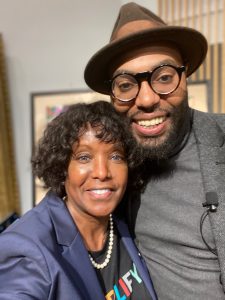 Peggy Brookins, NBCT, is President and CEO of National Board for Professional Teaching Standards. Prior to this role, she was the National Board’s Executive Vice President and also served on the Board of Directors. In July 2014, President Barack Obama named Brookins as a member of the President’s Advisory Commission on Educational Excellence for African Americans. In 1994, she co-founded the Engineering and Manufacturing Institute of Technology at Forest High School in Ocala, Florida, where she served as director and as a mathematics instructor until her arrival at National Board. Brookins achieved her certification in Adult and Young Adolescent Mathematics in 2003 and renewed in 2013. She has been inducted into the University of Florida Hall of Fame and is a Florida Education Association “Everyday Hero,”  and received the association’s Excellence in Teaching Award. In 2013, Brookins was named an Aspen Ideas Festival Scholar. We are proud that she is also a member of Fund for Teacher’s Board of Directors. Follow her on twitter @Pbrookins44. (Pictured with Dr. Chris Emdin, professor in the Department of Mathematics, Science, and Technology at Teachers College, Columbia University and author of For White Folks Who Teach in the Hood…And the Rest of Y’all Too: Reality Pedagogy and Urban Education.