In one week, many will commemorate Juneteenth, the day the Emancipation Proclamation – issued on January 1, 1863 – was read to enslaved African Americans in Texas. Today’s Fellow Friday highlights Chris Dolgos (Genesee Community Charter School – Rochester, NY): the inspiration for his 2020 fellowship researching Frederick Douglass’s UK speaking tour, and resources you can use in your own classroom. 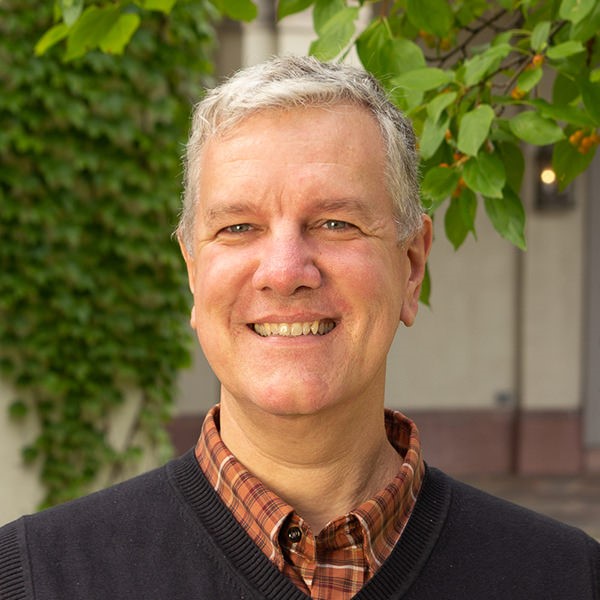 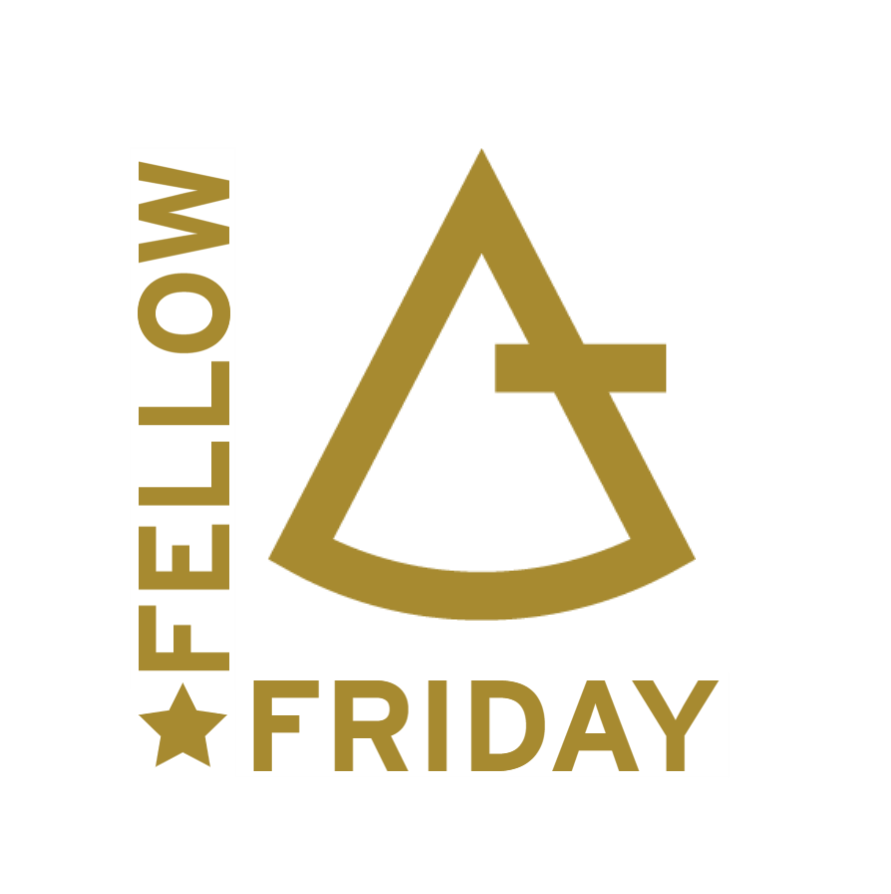 Chris is a veteran teacher within EL Education, an innovative network of schools across the nation dedicated to equal emphasis on students’ mastery of knowledge and skills, high-quality work and character. The school’s unique approach to curriculum divides the school year into distinct, cross-curricular “expeditions” culminating in a final products. The inspiration for Chris’ 2020 fellowship focusing on Frederick Douglass was catalyzed by such a product that, interestingly, had its roots in Chris’ 2015 fellowship research on how Romans constructed public works projects (such as Hadrian’s Wall) to divide, as well as unite, people in a multicultural society.

Chris’ sixth graders’ AdobeSpark presentation Whose Renaissance Is It? led to a grant from Teaching Tolerance for a collaboration with community-based artists, to four murals the painted across Rochester. And just last week, the students presented this final presentation to the Genessee Comunity Charter School board of directors via Zoom. The board immediately motioned to revise the school’s code of conduct based o the recommendations of students’ work.

“After a year like this – it was satisfying and timely to see the students’ work received so warmly,” Chris said. 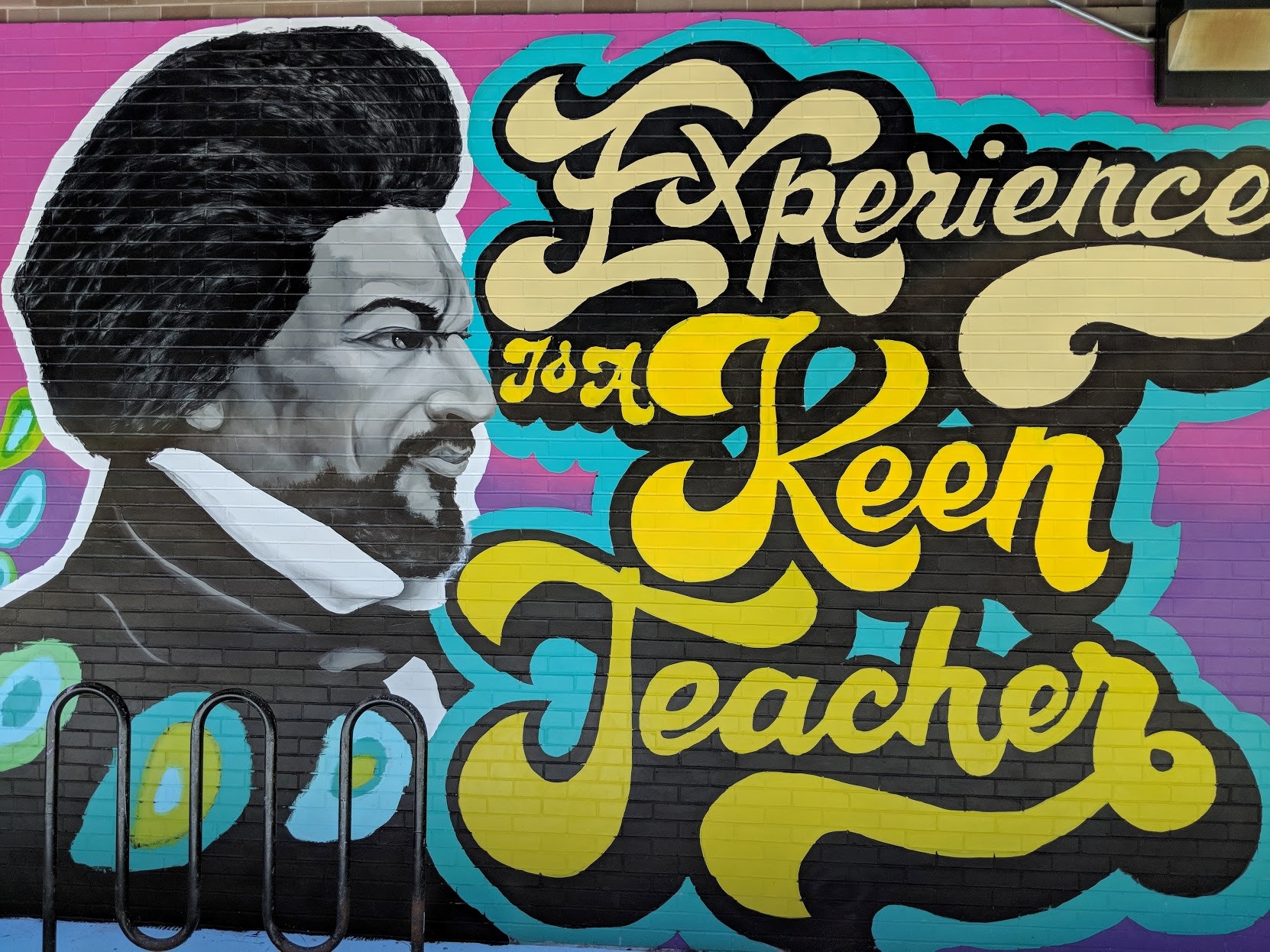 One of four murals painted by Chris’ students around Rochester, NY.

Read about the Teaching Tolerance grant and watch this video about the mural project. #ROCBeliever

We asked Chris how he arrived at this particular fellowship (his previous ones focused on Hadrian’s Wall, bird migration and Neanderthals – what can we say, there’s a reason why he’s one of 5 four-time FFT Fellows). Chris’ response mirrored his path toward becoming the the anti-racist and abolitionist teacher he wants to be.

“Working with amazing  Shawn Dunwoody, our kids helped paint four murals across the four quadrants of Rochester. It was the first time we’d engaged the class to see neighborhoods beyond their own and see our city as a whole – flaws and all and it was a powerful moment for all of us,” Chris said. “It also laid bare just how much work there is to do in understanding the inequity in our city. Seeing it through my students’ eyes forced me to see the systemic barriers and my own role in upholding them.”

Chris dug into Layla Saad‘s “Me and White Supremacy” workbook, which launched months of facing up to “biases, classism and even racism that had no doubt seeped into my interactions with kids.”

“I picked up the work and with other white people, dug in. I wrestled with my prejudice and sat with the guilt of not doing enough – or even worse – just enough. I cycle back through that workbook every few months. A few weeks later came the news that a Frederick Douglass statue – one of many celebrating the bicentennial of his birth – had been vandalized. I don’t really know why that hit me as hard as it did, but I was furious.”

“We talked about it as a teaching team and with the class (now a new group of students) and posed the question – what do we do?” said Chris. “Naturally, the kids had the answer : ‘We show up.’ So we did – we alerted parents that we’d be taking a walk to the site where the vandals struck on the day a new statue took its place to show that hate and ignorance has no place in our community. Highlight of the day? Seeing Margaret Finch, my mentor from my first year of teaching (20 years ago!) thanking me for making time in the day to have our students be a part of this. That day was really the day I knew I needed to commit to becoming and anti-racist teacher and anti-racist human being. I had started with baby steps, head down making sure I didn’t trip over my words and actions and now was ready to look up and fail forward, as often happens when taking risks.”

“That year our students were examining food justice and the need for a food policy council in our city. A lot of our work was around the intersection of race and class. The data told the story of systems of oppression and discrimination towards people of color. Diminished health outcomes, food deserts and nutritionally empty foods in black and brown communities, poverty and time constraints that limit food choices – the kids learned about all of it. It was a privilege check time and I realized I still had more to do and more to learn.”

“For the 2019-20 school year, Alexis and I were approached by our school leader and members of our board to examine our school’s code of conduct and have the kids help us reframe the rules through the lens of restorative justice. That was eye-opening work and we’re just about ready  to share those recommendations with our board.  That and lots of reading and reflection of the past few years’ projects helped bring into focus my 2020 FFT Fellowship – to explore what it means to be an anti-racist educator and abolitionist teacher.”

Chris’ reading list included: Dr. Ibram Kendi (How to Be an Anti-Racist) and Bettina Love (We Want to Do More than Survive: Abolitionist  Teaching and the Pursuit of Educational Freedom). His other inspiration was local hero Frederick Douglass.

“Douglass’ travels to Great Britain, where he spoke to white people to reject and dismantle slavery and join the abolitionist cause, were unfamilar to me. It was on these trips that enough money was collected and donated that would allow him to purchase his freedom and buy the printing presses that gave birth to his abolitionist newspaper, The North Star.  I made contact with professor Hannah Murray in the UK who had done the research on Douglass in Great Britain that shaped the itinerary I proposed,” Chris said.

“And then came COVID. Schools closed. Travel was suspended. Fear and anger raged as the death toll climbed. FFT made the wise decision to postpone all fellowships until summer 2021. And then Breonna Taylor was murdered. Then came Ahmad Aubrey. Then came George Floyd. Then came the righteous anger of hundreds of thousands of Americans, followed by many more thousands around the world. A lot of folks were in the shallow end of anti-racist work when this tidal wave hit. Being only a few years into this work myself with any real sense of commitment, I struggled with how to best serve my students – but our team opted to simply listen and let them share and process through a listening circle. It was a start and a conversation that is hard to maximize through the tiny boxes of a Zoom meeting. And with the year drawing to a close, we want the kids to know they should keep speaking and keep listening and be active in questioning the status quo. Several went to the protests. Others joined in the clean up of the looting and vandalism that followed. I keep thinking, “Man, I could REALLY use that fellowship this summer!” but a lot of the work that needs to be done in my classroom needs to be done internally, by me.

“While it’s no substitute for my fellowship, current events and these activities are already conspiring to shape the direction we’ll be taking with next year’s sixth graders. And in June of 2021, as I begin to follow in Frederick Douglass’ steps in the UK, I will already be one step closer to becoming the anti-racist and abolitionsit teacher I want to be.” 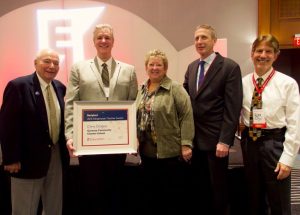 Chris is a sixth-grade teacher at Genesee Community Charter School in Rochester, NY and is a three-time Fund For Teachers Fellow. History and geography are two passions he brings to life in his classroom, through field work, guest experts and product-driven Learning Expeditions. Chris has contributed to EL Education publications and Common Core curricular efforts, was awarded EL Education’s Top Teacher Honor for the nation, and is a NY Educator Voice Fellow. Follow him on Twitter at CJDTeaches.