Today California’s state legislature will officially apologize to Japanese Americans sent to internment camps during World War II. This aspect of World War II is one many students don’t learn about during history classes, but one that many FFT Fellows seek to understand and share. Today, we share the learning of Timothy Nagaoka, whose grandfather fought for the United States in the European Theatre during the war. 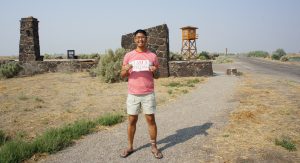 At the Minidoka National Historic Site in Idaho

I teach Japanese as a foreign language to elementary and middle school students, many of whom come from immigrant families. Some families are from Central and South America, some from the Caribbean Islands, and others from Southeast Asia. I share this heritage. I grew up in Japan. My mother is sansei (third-generation Japanese American) from Hawaii; her father, a nisei (second-generation Japanese American), was one of many Japanese Americans on the island who enlisted after Pearl Harbor. He wanted to prove his loyalty to the country that had become very suspicious of his people, so he fought with other nisei from Hawaii in the 100th Infantry Battalion, which became one of the most decorated in military history.

Growing up, I heard my grandfather tell stories of fighting in Europe in World War II. Not until much did I learn of another battle fought by Japanese Americans on the mainland. It was not a battle of bombs and bullets, but a battle of patience and perseverance. Like my grandfather, who demostrated his patriotism by enlisting, many Japanese Americans proved their loyalty by enduring relocation to internment camps.

To fully understand and better teach this period of American history, I designed my Fund for Teachers fellowship to explore the Japanese American experience during World War II and – more specifically – the US government’s handling of these citizens. 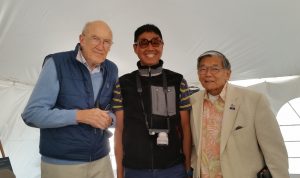 I drove 3,500 miles through 8 Western States over 11 days to research 10 monuments and former internment sites. I also stopped at the Japanese American National Museum in Los Angeles (where I took a selfie with  George Takai). An unplanned experience was attending the Annual Pilgrimage at Heart Mountain Relocation Center in Wyoming, where we honored those who who advocated, resisted and fought for Japanese Americans. It was this stop where I met former Secretary of Transportation Norman Mineta and Senator Alan Simpson. 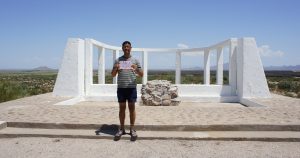 At the Gila River War Relocation Center in Arizona

During the fellowship, I filmed interviews with former internees about their experiences, which I’m using as resources with students and colleagues. I am also designing two curricular units that teach about the Japanese American internment experience: one for Japanese language teachers that incorporates phrases and dialogues used in camps; and one for English Arts and Social Studies teachers who want to teach about the topic. Upon completion, I will offer workshops throughout Boston Public Schools and through local non-profit teacher training organizations.

In my classes, I’m using the knowledge and connections I gained through my fellowship to teach about the forced internment of Japanese Americans during the war. Previously, I’ve taught Japanese customs, traditions, history and culture, but I’d never considered teaching the Japanese American immigrant story. I now incorporate into my language lessons words and phrases, such as gaman (perserverance) and shikata ga nai (can’t be helped), that were often used by the Japanese Americans to describe their confinement. I’ve come to understand that by teaching my culture’s extraordinary circumstances, I can deepen connections with students whose lives reflect similar themes, old and new. 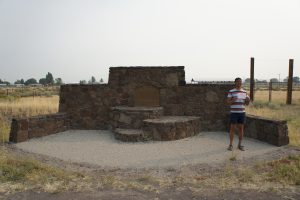 On January 2nd, 1945, restrictions preventing resettlement in the 100 mile Exclusion Zone along the West Coast was removed. I believe a strong democracy lies in not forgetting the past, especially not the mistakes. My fellowship researching the plight of tens of thousands Japanese Americans was humbling and allowed me to gain a more complete perspective of the American immigrant experience. I am using this perspective to better understand (and teach) my students from immigrant families themselves.

Timothy Nagaoka teaches Japanese in six schools around the greater Boston area and has dedicated his career to creating opportunities for students and colleagues to connect with Japan. In recognition of his work, Timothy has received the John E. Thayer Award from the Japan Society of Boston, and the Henry L. Shattuck Public Service Award from the Boston Municipal
Research Bureau.

Read about another FFT Fellow’s experience researching life in and around Japanese Relocation Camps in Utah and Colorado here.