Some additional background: I grew up the son of a naval officer from the Cold War. It was instilled in me to honor the sacrifices made by all military, but I have always sought more knowledge and information about the contributions made by American Indians, especially during World War II. I grew up with stories about my great uncles landing on the shores of Normandy and have always wanted to visit there and other sites in Europe where the war was fought. A recent article about the dedication of the American Indian Memorial at Normandy renewed my passion.

I combined that passion with the aforementioned curriculum challenge into a Fund for Teachers fellowship. Last summer, after a two-year delay due to COVID, I researched at major European World War II sites the American Indian warriors who fought for their country. In France, Belgium and Luxembourg, I gained first-hand knowledge and experience of this war by visiting some of the major sites, which solidified my own understanding, and I can now share with my students what I have experienced and documented about the American Indian warriors who fought and died there. 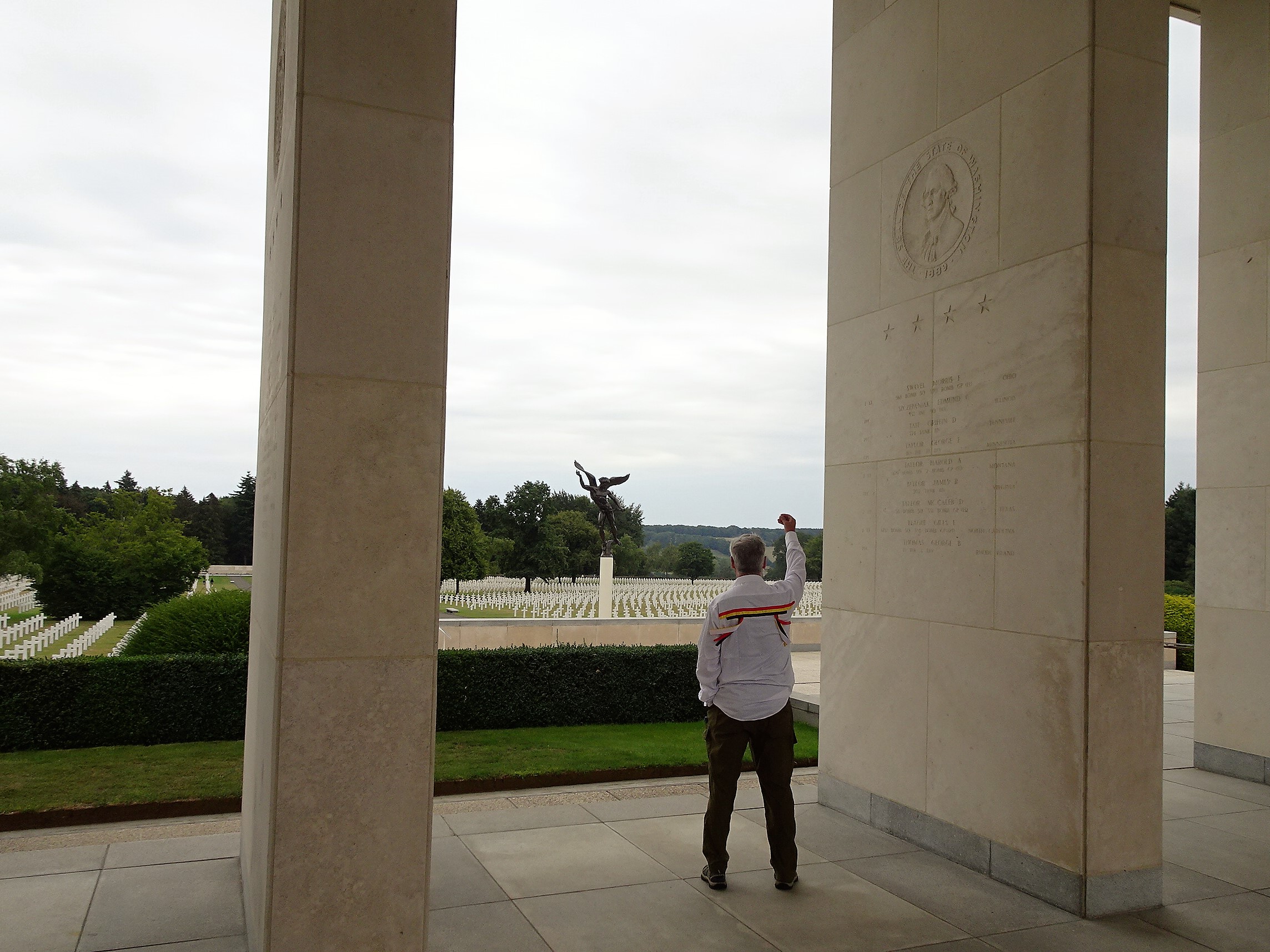 Henri-Chapelle American Cemetery-Belgium. Given the choice, 40% of families chose to have their soldier interred in a US cemetery in Europe. As I looked out over this sacred ground, I pondered the difficult choice these families had to make.

Walking the cemeteries of Normandy and Henri-Chapelle and the grounds of the Battle of the Bulge, was a powerful, moving experience. One could still feel the soldiers’ presence, their spirits, 76 years later. The emotion, knowing that these soldiers gave the ultimate sacrifice, was quite raw. Many were teenagers, not much older than my students. I walked the beach at low tide and crouched in a foxhole trying to grapple with what sounds, smells, sights, fears these individuals experienced. 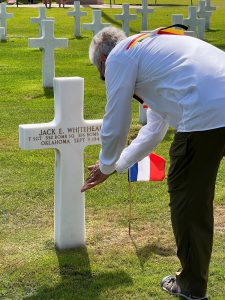 After saying a prayer, I left sacred tobacco as an offering for the ultimate sacrifice that was made by Native American soldier, Jack Whitehead. 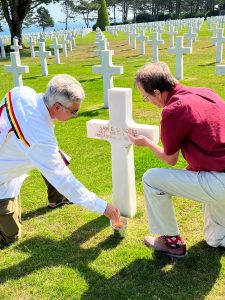 Sand from Utah Beach is used to rub into the engraved name. Sam Sanders is the younger brother of Gafford. The cemetery curator asked me to say a prayer for these Native American brothers. 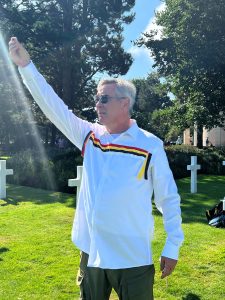 As I said a prayer for Native American soldier, Gafford Sanders, a shaft of sunlight hit my arm. It fit with the strong emotions one could feel at this time honored, sacred place, Normandy American Cemetery.

I am proud of my Native American Heritage. My family is very involved in our tribe. Having said that, I am not one to wear my heritage on my sleeve. Furthermore, I am considered an introvert. When we pulled into Normandy’s parking lot-a parking lot full of cars and tourist busses, nervousness and apprehension flooded over me. My wife and friends talked me through this anxiety. I donned my regalia shirt, stepped up to the plate and took my best swing.

At Normandy American Cemetery, I was expecting to say a prayer for three Native soldiers, instead, I said a prayer for five. The guide told about brothers that were buried near each other, Sam and Gafford Sanders-Native soldiers. She asked if I would say a prayer for them. Sand from Normandy’s beaches was rubbed into the engraved name, flags were placed beside the cross. I said my prayer and placed tobacco. I was given the flags from each grave along with the remaining sand. The reception was humbling. 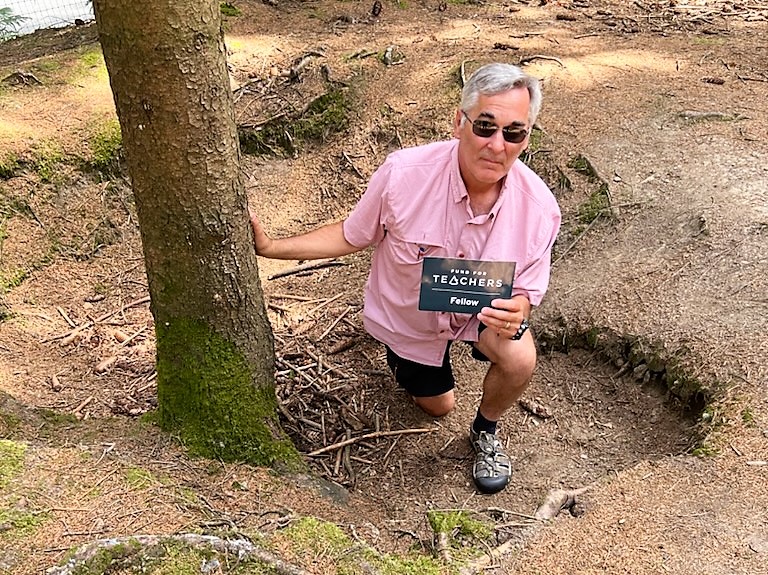 Battle of the Bulge foxhole. After touring the museums and battle sites, as I knelt in this shallow foxhole, it was hard to comprehend the smells, sounds, hunger, terror, cold and confusion that gripped this area in the winter of 1944/45.

When I teach the WW2 unit in the spring, I can incorporate my Fellowship experiences into the unit. The curator of the Henri-Chappelle Cemetery gave me a list of 17 Native Americans buried in US cemeteries, in Europe. The list will be a starting point for a research project honoring Native soldiers. I plan to have students investigate these soldiers, create a display and present their findings at the yearend school and community powwow.

Beyond the classroom, I’m thinking about riding my motorcycle to some of these warriors’ communities during the summer and reaching out to their tribes and family members to share my photos and experiences. Many tribes have cultural centers and/or sections that honor their warriors}. It would mean a great deal if I could share a picture and the flags from the graves with family and tribal centers. It would be such an honor to learn more about these soldiers’ lives.

Bret Godfrey is a 34-year teacher at American Indian Magnet School in Saint Paul, MN. He teaches 7th and 8th grade social studies. He is also member of the Potawatomi Tribe. Listen to our interview with Bret prior to completing his fellowship on this episode of Fund for Teachers – The Podcast.

Top photo: At the Charles Shay Indian Memorial, Bret said a prayer for all Native American soldiers who fought during the Normandy Beach invasion, including his great uncle. 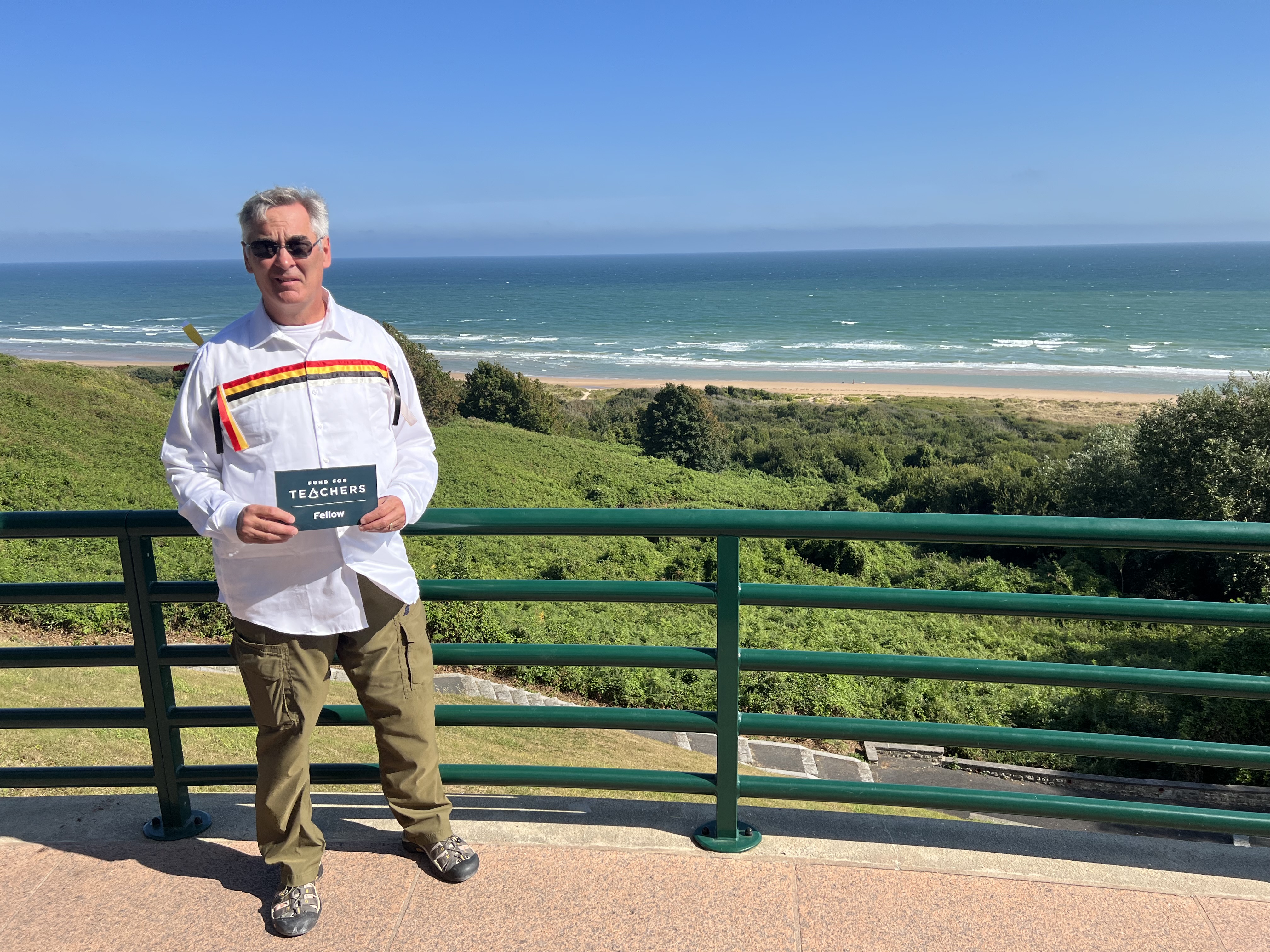