Leaving a New Legacy in Hiroshima

On this day in 1945, an atomic bomb flattened Hiroshima – one of two bombings that induced the Japanese to surrender and end World War II. FFT Fellow Kelly Loubier (Orville H. Platt High School-Meriden, CT) participated in the anniversary ceremonies at the Hiroshima Memorial Peace Park, where she also delivered to the Children’s Memorial paper cranes folded by her students in keeping with the novel Sadako and the Thousand Paper Cranes.

Kelly designed this fellowship to document the nuclear legacy in Nagasaki, Hiroshima, Osaka and Fukushima and demonstrate how these events continue to impact citizens and the greater world community in relation to policy decisions regarding war, nuclear weapons, nuclear energy, peace and disaster relief.

I headed to the memorial service this morning around 7:30 and I joined crowds of people who I thought were just going to work. I was so wrong about that. They were all headed to the cenotaph and the ceremony at 8 am. I read online afterwards that 70% of all citizens of Hiroshima have attended a memorial service for the atomic bomb victims. It’s not a recognized day off, so kids still have school, men and women still go to work. The ceremony took place from about 8-8:45 and it included adding names to the cenotaph, a moment of silence at 8:15, an address from the mayor renewing calls for peace and decrying nationalism and addresses from students. They also sang a song of peace and released doves. After, people lined up to deliver flowers and offer a prayer. It’s 2pm and there is still a line. There have been groups promoting peace and youth groups, high schools and universities teaching people about the atomic bombs and interviewing others about peace in the park. More cranes are being brought to various monuments and people are purchasing lanterns for later. The sense of community is unreal, even 74 years later. One of my major take aways from Hiroshima is that the knowledge about the atomic bomb is so ingrained in the fabric of the city that it isn’t something that just happened in the past and that’s it. It’s something that the people of Hiroshima must learn about and teach others about so that we as a global community don’t let it happen again. There were so many people in the park today, but what really amazed me was the amount of students involved. The Boy Scouts handed out programs and cold towels before the ceremony. Sixth graders gave the children’s address during the ceremony and other students sang or played music. A group of fourteen year old girls gave me a peace declaration their high school drafted. University students interviewed me about peace. Other kids were involved in music, tours, tea ceremonies, peace demonstrations, delivering cranes, reading Sadako’s story (in English and Japanese) and presenting their art. So many families were out with their young children tonight helping them to send out lanterns, color wax candles and present flowers and prayers to the cenotaph. My mind has constantly been thinking of the Margaret Mead quote, “Never doubt that a small group of thoughtful, committed citizens can change the world; indeed, it’s the only thing that ever has.” The people of Hiroshima are leading the charge to a more peaceful world. The face you make when a small Japanese woman grips you by the hand, puts you in a line of other confused foreigners, and puts a necklace of paper cranes around your neck. Turns out, I was given a Croatian flag to wave and lead the crowd in a prayer for peace for Croatia. All countries were represented. The artwork pictured represents 193 countries, their flags and a message of peace in their language. 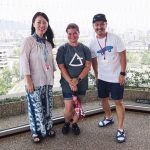 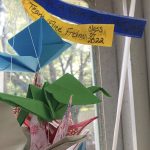 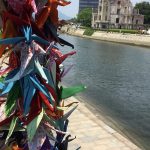 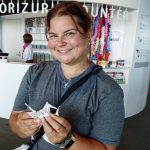 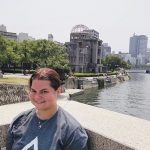 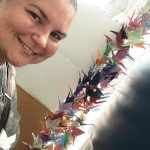 Iwant to give thanks to Yuji @fellanandez_tokugiwa and Holly @hiroshimayasuko from @magicaltripcom for a wonderful tour of the Hiroshima Peace Memorial Park and the pictures. I learned quite a bit during the Heiwa Walking Tour that I’m looking forward to bringing back to my classroom and the Meriden community. I learned a lot today and I’m still trying to process everything and put it into words. I did go to the Children’s Peace Monument this afternoon to drop off the cranes. They’re in the second cabinet at the monument and I filled out a sheet so they will be recorded. In Japan, the atomic bomb is taught with the stories of the people who were affected through their clothing, their pictures, their art and their stories. I learned that many of the victims were school aged children between the ages of 12-14. They had been reporting to school on August 6 at 8:15 am to clear buildings to create buffer zones in case of an air raid to prevent fires from spreading. Many of their stories are told in the Hiroshima Peace Memorial Museum, allowing visitors to bear witness and connect with the human aspect of this terrible tragedy. It is not until the end of the museum when you learn about the science of the atomic bomb, the reason it was used and what the global community did with nuclear weapons after World War 2. We need to teach these stories in the United States.

There is a rumor that persists that claims nothing would grow in Hiroshima for 75 years after the atomic bomb. I heard the rumor as a student and I still hear it from my students today. Hiroshima is actually very green and there are trees everywhere. This is because during the recovery period, citizens and organizations from Japan and the global community and governments around the world donated trees. There are also 170 Hibakujumoku (survivor trees) in various locations around Hiroshima that are marked with plaques. The organization, Green Legacy Hiroshima works to spread saplings from these trees around the world. I’d love to talk to @ctca19 in September more about this organization.

Thank you, Katie, for the exemplary job you’ve done in designing, pursuing and sharing your learning with us. You can follow her entire fellowship on Instagram @kcloubier. Katie teaches 9th grade world history and 11 and 12th grade human rights at O.H. Platt High School in Meriden, Connecticut. As a third year teacher, she believes that students should walk away from her classroom with a greater understanding of the world around them. She has worked with exchange students from around the world and traveled to places such as Egypt, El Salvador and Iceland, bringing her experiences with her into the classroom.