Speaking Out by Teaching

Today marks the 75th anniversary of the liberation of Auschwitz. In November 2005, the United Nations General Assembly designated this day as International Holocaust Remembrance Day to honor the six million Jewish victims of the Holocaust and millions of other victims of Nazism. We choose to do so by sharing the story of Kimberly McCabe, social studies teacher at Gulf Coast Middle School, Spring Hill, FL. With her Fund for Teachers grant, Kimberly joined a professional learning tour in Finland to explore that country’s model of Phenomenon-Based education practices, then researched historical sites and landmarks in Germany, Poland, the Netherlands and the Czech Republic to create a Phenomenon-Based unit on the Jewish Holocaust.

On January 27, 1945, the Soviets liberated the largest of the Nazi death camps which was located in German-occupied Poland. By this point Auschwitz and Auschwitz-Birkenau had an estimated death toll of over 1.1 million people and although it had originally been a detention center for political prisoners, it had turned into a death camp for Jews, Roma, and others who were deemed enemies of the Nazi state.

As we memorialize the beginning of the end of Auschwitz, I am brought back to this summer when, through Fund for Teachers, my colleague and I stood inside the gates of Auschwitz and took part in a six-hour educational tour of the camps. Our purpose? To more deeply understand life inside a concentration camp, to have the opportunity to speak directly to the very highly trained guides at Auschwitz and ask them the questions we still had, and to bring back resources to our classroom. Although we left Auschwitz with our arms full of books, professional photos, and other resources, the biggest resource we brought back to our classroom was our memories of that day and the feeling of walking through history. 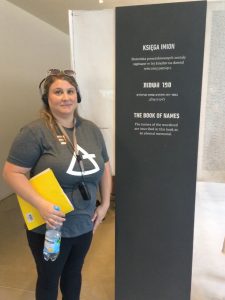 One of the memorials that I found most impactful was the book of names at Auschwitz. Here is listed every single victim of the Holocaust. They also included blank pages for the 2 million people who were not identified.

As a Social Studies teacher, standing in a place where history has taken place always has a particular reverence to it. Touching a piece of the past always feels transportive and surreal. Auschwitz was no exception; in fact it may have been even truer there. I took a few moments during the tour to sit in one of the memorials and reflect on the sheer number of lives lost there and what could be taken from that ash and turned into beauty in the future generations, and what role I would play in that as a teacher. The six-hour educational tour is the longest tour that Auschwitz provides. It covers both Auschwitz and Auschwitz-Birkenau, and while I recommend the experience if you are visiting, I cannot stress enough how taxing it is both physically and emotionally. We left the location completely drained. Our evening was spent silently reflecting on our day. My thoughts kept returning to the fact that I had spent less than a workday in Auschwitz under voluntary circumstances, on a beautiful day in mid-summer. How could I possibly ever understand what life in Auschwitz was like for those who lived it? How could anyone survive that? Moreover, how could any human inflict that on another? The thoughts seemed too heavy for that day, and even today, months after my visit I feel the same when I reflect back. Now, even more than ever, it is my goal to honor the victims and celebrate the survivors of the Holocaust while also empowering the future generation to create a world in which discrimination no longer exists and differences are embraced.

Each year I am humbled by the task of teaching the Holocaust to my 7th grade students. For weeks prior to the unit I begin to feel the weight that comes with that responsibility. My ultimate goal is always to honor the victims and survivors as well as their families, while at the same time opening up my classroom to discussions of how this applies to them today. If I could choose one thing that every student would take away from this unit, it would be that we should always stand up for those being persecuted among us. This will not always mean large groups of people who are being persecuted by their government; it may be as simple as standing up for the kid being bullied on the playground-or more likely via social media. It may mean reaching out to those who are different from you in order to better understand their perspective. It may mean choosing to vote with other groups in mind. 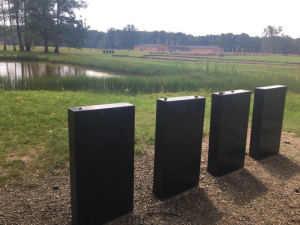 One of the memorials at Auschwitz-Birkenau. The location was once used as a dumping site for crematorium ashes. However, now it is a quiet place to sit and reflect and memorialize those lost here.

Whatever form it takes, being an upstander is worth the temporary discomfort that may accompany it because if we don’t stick together as members of the human race, we will eventually look around us to find that there is no one there to support us in our time of need.

For this I rely on a particular quote by Martin Neimöller that always makes an impact on me regardless of the number of times I have read it.

Then they came for me
And there was no one left
To speak out for me.

Each week students are shown the biography of a different upstander. They are highlighted as the true heroes of the Holocaust, regular people who did extraordinary things to help strangers. To encourage this sense of empathy in my students, I hand-select a person for them to follow through the Holocaust. I talk to them about how each one of the people they will follow was someone’s child, sibling, parent, or friend. That just like all of us, they were a real individual with hopes and dreams, with fears and insecurities, with a whole future in front of them. I let them know that I am counting on them to take care of this person during our journey. To care about them, to become invested in their life story. Some even take time to research the person on their own time to learn more about them. Throughout the unit they find out more about the person they are following. They learn about their lives and families prior to the 1933. They hear about their family’s businesses and work, their home life, their country. As we move through the timeline of events they witness the changes in their individual’s life. Finally at the conclusion of the unit they find out whether or not their individual was a victim of a survivor of the Holocaust. It is a very somber class period because by this point the students have realized that no matter what the outcome, their individual has faced years of anguish that we can’t even imagine today. It is eye-opening to students that life can change so quickly because of one idea. 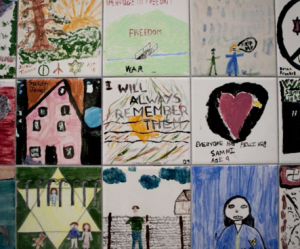 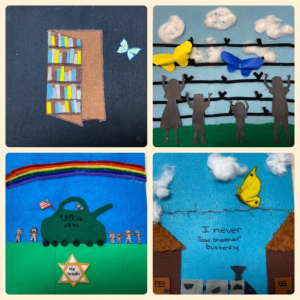 This year as a capstone to the unit, our students took part in a project which memorialized the victims and survivors of the Holocaust by creating a memorial quilt. Our local Holocaust museum is to credit for the idea behind the project as it is one they have done with visiting classrooms and have displayed in their learning center. Our students had the opportunity to visit the museum, hear from a survivor, view the quilt designed by past students, as well as take a guided tour of the museum. This visit created many questions for them which we explored during our unit. At the end of the unit they each created a felt quilt square. Each individual also wrote an accompanying essay explaining the symbolism present in their quilt square. The pieces were then combined to make one large class quilt as a memorial to the lives lost in the Holocaust and display in the school as a way to remember the lessons that can be learned from this tragedy.

Although there is nothing we can do to change the horrifying things that occurred during the Holocaust, the quilt project allowed our students to feel as though they were able to give something back to those who suffered by remembering and honoring them.  Rather than focus solely on the horrible things that were done, it allows us to focus on the beauty of the individuals and the hope that future generations will never allow this to happen again. 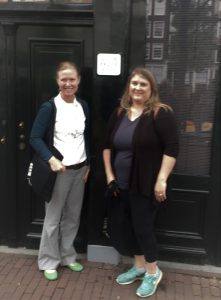 Kimberly (pictured on the right with a member of their group at the Anne Frank House in Amsterdam) is a middle school Social Studies teacher in the Tampa Bay Area. She is a mom of 3 and enjoys learning as much as she enjoys teaching. She is always looking for new ways to learn through experiences, and traveling to historic sites is her preferred way to learn. She has been awarded with 3 NEH teacher grants, is a graduate of the Florida Justice Teaching Institute, and a member of the 2019 iCivics Teacher Network.