Monday begins World Refugee Awareness Week, an extension of the United Nation’s annual World Refugee Day on Wednesday, June 20th. In solidarity with those forced to flee as a result of resettlement, poverty, unemployment, stigmatization, and bias, we share one day in the fellowship of two teachers from Naperville, IL. Christine Halblander and Jenn Nekolny are currently exploring physical and societal divisions in historical and contemporary Poland, Czechia, Austria and Germany.

They designed this experience to supplement Social Studies and Language Arts curricula that enhances junior high students’ interest in human rights, migration and refugees. In order to strengthen their teaching practices, their fellowship goals are to: 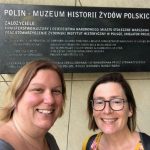 At the POLIN Museum in Warsaw 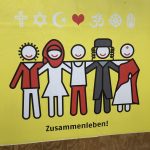 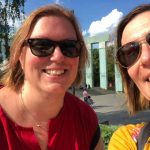 At the Warsaw Uprising Monument

Below is a day in the life of their fellowship, after visiting Auschwitz-Birkenau but before helping teach refugees English in a Berlin cafe… 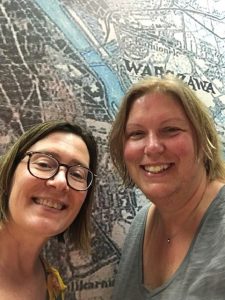 “Do you remember the floor of your childhood home? Can you recall playing outside with your siblings? Rushing up the stairs with good news? Your grandmother’s “good plates” pattern?

As we were checking in to our Air BnB flat in Krakow, our host asked if we wanted a little history of the place. Of course. . .we’re teachers and learners and, to be honest, the outside of the building left a bit to be desired with all its graffiti and crumbling exterior walls. It would be nice to hear some history of this building that had clearly seen better days.

He told us that just as they were finishing the interior renovations of the flat last year, he came to check on the progress. As he was walking in, he noticed “an old grandma” at the entrance with someone who appeared to be her daughter. He asked if they needed to be let in, but the woman’s Polish was weak and she responded in English that this used to be her building. Switching to English, he asked her which flat was theirs, as there had been many changes and divisions over the years. As they turned onto the first landing, tears began to well in her eyes as she recognized the tile floors in the hallway. 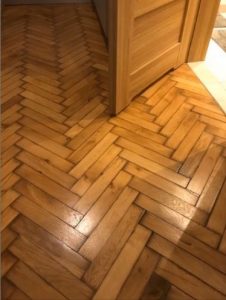 It turned out that the apartment he hosts was her family’s home for years before the Nazis took power and forced them out. The walls are re-plastered, the interior courtyard is filled in with the back sides of restaurants, the stairs have lost their shine (and have a pleasant rounded edge where thousands and thousands of footfalls have happened), but the heart of the place is the same. He unlocked the door to her old apartment and she began to cry when she saw the preserved floor. This beautiful wood herringbone-patterned floor where she played as a seven year old girl. This floor where she would help her mother clean up crumbs that fell from the table. This floor where she would place her shoes after coming up the flight of stairs at the end of the school day. This floor where her suitcase lay waiting next to the door in case they had to flee. This floor opened the gates of memory. This woman was 94 years old and wanted to first see her family’s home and then find the families that gave her refuge when she was forced to flee to thank them. For 87 years, she’d imagined these floors, these stairs, this place. She’s imagined the faces and clothing and sweet smells of dinner in this kitchen where I’m sitting typing this now.

Why are we doing this? Why are some of these posts so long? Our intent is to have our students use the information in our posts and notes not published here to create their own learning. One plan is to have them map our journey on GoogleTourBuilder. Another is to create a profile box for each person (photo, map, realia such as a bar of soap or spice mix, written notes, etc) and have students create fiction and non fiction writing that pertains to the person and historical period. We are also using Refugee by Alan Gratz as a mentor text where students will write letters between characters.

The remainder of this team’s 22-day fellowship includes additional WWII research, as well as the modern refugee crisis. They will be:

You can follow the remainder of this fellowship on the teachers’ Facebook page titled Tear Down These Walls. 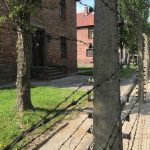 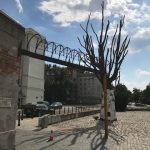 The Pawiak Prison Museum in Warsaw 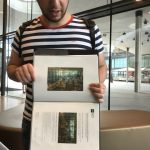 A walking tour of refugee agencies in Vienna