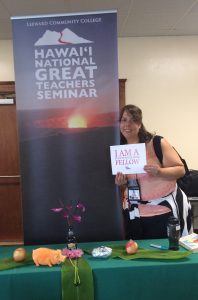 During the 2014/15 school year, the Fund for Teachers grant opportunity was presented in Norwalk and, consequently, I created a wonderful learning experience for myself; but I’m here to say that Fund for Teachers doesn’t just just touch students and teachers. It touches so many more people. In my case, Fund for Teachers impacted teachers whom I met in Hawaii, as well as my family and, since April, Fund for Teachers has impacted a special population of doctors at Walter Reed Medical Hospital in Bethesda, Maryland.

My father, Joseph Giandurco, is a medically retired Vietnam Marine and some years ago he was diagnosed with diabetes, causing him to develop kidney disease related to his service. He was my biggest supporter when I told him I was going to try for a Fund for Teachers grant that would help my special education students learn in a new way. He encouraged me to try and, thanks to his support, my idea was brought into the light. And as part of my fellowship, my family and I have been shown the true meaning of the Aloha Spirit.

During my journey to becoming a better teacher, my father was undergoing a journey that was much harder – he was seeking a kidney donation, since no one in our family was a proper match. In April my dad, mom and I decided to visit Walter Reed in hopes of an eventual kidney transplant. While going through their process, my dad managed to tell every doctor about Fund for Teachers and the grant I earned to study in Hawaii for my students. One doctor was so impressed that he told my father he should go with me and see my work in action. That sparked my dad’s desire to pay his way to Ohau, too. 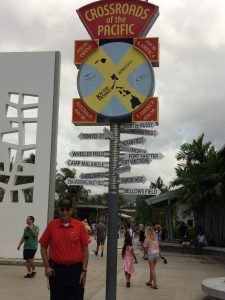 The experience was rewarding for both of us. My dad was able to enjoy Honolulu while still undergoing his peritoneal dialysis. He loved going to the various sites and was very excited to hear about the different myths and legends presented to us in the diverse Hawaiian culture. He also really enjoyed seeing all the sites he could while he was feeling well, including Pearl Harbor.

While touring this solemn memorial, we met several veterans, as well as enlisted men from different branches. One Marine veteran who worked as guard and was a native Hawaiian saluted my father wishing him “Semper Fidelis,” but then also told him that Hawaii has a way of presenting new journeys and “healing a person’s worries.” We all thought that was just a nice way of saying, “Take time to enjoy the area.” Little did we know that his message was prophetic. In retrospect, I can say that this veteran shared our first dose of the Aloha Spirit and we didn’t even know it.

On October 8th, my dad was finally accepted by Walter Reed and the following day, we received the call to come to Maryland immediately because they had a kidney from another military veteran from Hawaii. With tears of joy and disbelief, my father, mother and I drove eight hours in rainy, Friday night traffic to get him ready for his procedure and, on October 10th, he received the greatest gift – a second chance from another servicemen and his family who generously shared the gift of life with a stranger.

Walter Reed runs an outstanding transplant program available to active and retired soldiers and families. It was established in 1970 and is one of the nation’s oldest and most successful transplant programs. Our family is so blessed to see my dad making progress after waiting 2½ years on multiple wait lists, including New York and Yale. The fact that the kidney came from Hawaii from another veteran makes it all the more special.

Finally, the transplant team encourages patients to give their new organ a name. In the spirit of Hawaii, my dad named his “Mahalo,” which means “thank you.” Now, every doctor helping my father recover in Maryland knows about his extra special gift filled with the Aloha Spirit and about my professional development grant from Fund for Teachers that changed all of our lives.

Yesterday was Veteran’s Day and, thanks to a retired serviceman’s continued dedication to his country, another veteran got to celebrate the day as well another Marine Corps Birthday.

Thank you to Missy and her family for sharing this wonderful story. Click here to learn more about Missy, her fellowship and her first encounters with the Aloha Spirit.