The facts represent La Malinche (or Doña Marina) as a slave, advisor, mistress and emissary. Whether those roles positioned her as a hero, victim or traitor is up for debate — which is what the students of Glen Meinschein and Alejandro Avalos did this semester. Following a fellowship investigating one of the most controversial figures in Mexican history, Glen and Alejandro led their middle schoolers through an exploration of colonialism, feminism and indigenous history to reach a broad range of learners at the Brooklyn School for Collaborative Studies. They share the verdict below…

We recently concluded a very successful case study of La Malinche planned as a result of our research during our fund for teachers fellowship and using resources gathered during our travels in Mexico.

The first part of this case study focused on the migration of the first humans to the Americas, and the many societies and American civilizations that formed since then. To supplement students’ learning of these various native American cultures, we conducted fieldwork at the Museum of Natural History’s Hall of Mexico and Central America, where students collected information about different indigenous American cultures and compared them to the Mexica, which eventually would become the Aztec Empire. We planned lessons in class based on exhibits we visited including the Museum of Anthropology in Xalapa, the Museo Nacional de Antropologia and the Museo de Templo Mayor in Mexico City.

The second part of the case study consisted of students learning about the rise and golden age of the Aztec empire. We supplemented this learning with various texts we picked up in Mexico, including a number of photos from our visit to Aztec ruins and several museums. We were able to bring many of our trip’s highlights to the classroom, including a replica ceremonial obsidian dagger which we were able to find at craftsman’s market in Guadalajara and a wooden toy we picked up which simulated the important ritual of the “flyers of papantla” that dates back to even before the Aztec empire. Learning about the Aztec empire and building students’ knowledge on indigenous cultures was a way for us combat the many eurocentric approaches to learning about the conquest. These traditional approaches make students familiar with European society and then are introduced briefly to Aztec society in a way that makes it seem jarring and “others” indigenous cultures. By teaching students about Aztec society, politics, and culture, they gained an important context they needed to learn about the conquest. 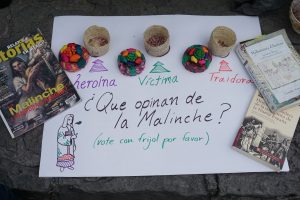 Our third and final part of the case study, was exploring the history of the conquest by closely analyzing La Malinche and her role in history. We learned using primary sources, secondary sources that looked at narratives of her life, and we posed the question whether she should be remembered as a hero, traitor, or victim. We supplemented this learning with the interviews we conducted in Mexico, the surveys, the texts, and the different perspectives that helped inform us of her current place in Mexican history. Students collected many pieces of evidence while thinking about source reliability and use this to write a persuasive essay to argue how she should be remembered. Here are some student quotes that highlight some of their learning and writing:

“After the conquest, the Spanish set up a very racist class system. In it, the more indigenous you are, the lower down in the chart you were. The darker your skin the more discrimination you received. This chart somehow found its way into our modern day Mexico. If La Malinche hadn’t helped Cortes defeat the Aztec, it probably wouldn’t have happened and this class chart wouldn’t have affected our modern day Mexico. Now her actions in the past are affecting Mexicans who are of indigenous blood – and they might not even know her. La Malinche shouldn’t be forgotten but remembered as a mistake to learn from. As a traitor she shouldn’t be forgotten, but kept in our memories as a mistake to grow from.” -Maia Mussalman

“Despite helping and protecting Cortes and his people, she was an unequal person who didn’t have that many rights, and despite saving the Spaniards, La Malinche wasn’t even respected, it was the opposite, she had to respect the Spanish, this shows that she was a victim. It is clear that La Malinche was a victim because, she helped Cortes conquer the Aztec Empire, but she was never honored as a hero. Also, she wasn’t even given partial credit for the conquest. La Malinche was never treated as a warrior, she was still a regular woman who had no rights and was a slave.” -Thommy Mendez Vazquez 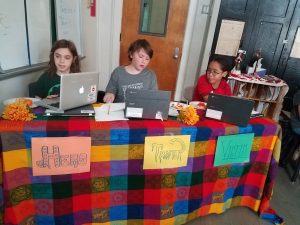 Defending their positions of “hero, traitor or victim.”

Students presented their learning in roundtables and parents, teachers, high school students, and community members came and learned about the legacy of La Malinche from our students. We capped off the unit with a potluck of food that represented students’ own cultures and mock trial where students from each class represented each side of the debate and tried to convince a guest judge of their perspective. Their classmates cheered them on and huddled with them to give them advice, share notes and evidence, and strengthen their representative’s side.

Throughout the semester, we observed students’ ability to think about sources critically grow as they were shocked to see how many primary sources contradict each other and how the indigenous perspective of history was missing since the Spanish erased most of it. They also were able to see multiple perspectives of history since we did many readers theater activities which had students role play as different historical figures with different perspectives and they supplemented this with sources from varying points of view. La Malinche became a natural bridge between many sides of the conquest and students analyzed her choices in light of the different groups she impacted. We also noticed that students pay more attention to finding and using evidence in their writing since the students with strong evidence were very hard to defeat in the debates.

It was a really great success and we are already thinking about ways to modify and enrich this case study for next year, including translating many of the videos and interviews we recorded and adding subtitles to these videos so that students can see more of our research from Mexico in action.

For more information on this team’s fellowship, visit the blog they maintained for students to follow.