Leslie Knope would say “yep” to Cassie Pierce (Prairie Vale Elementary – Deer Creek Public Schools, Edmond, OK). Played by Amy Poehler in the television comedy Parks & Recreation, Leslie served as deputy director of the Pawnee City Department of Parks and Recreation, regional director of National Park Service Midwest Region and founded the organization  Pawnee Goddesses to get young girls out into nature. Troop leader Leslie might even award a merit badge to Cassie for the Fund for Teachers fellowship she designed. 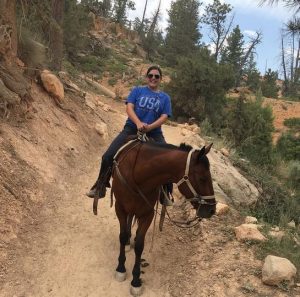 For 18 days and culminating in “Parks and Recreation Month,” Cassie explored five national parks in the southwest and western United States to incorporate the White House initiative

“Every Kid in a Park” into her fourth grade social studies curriculum. “Every Kid in a Park provides fourth grade students free access to all parks and sites managed by the National Park Service,” said Cassie. “The combination of this initiative, the National Park Service’s centennial, Oklahoma’s social studies standards, and my own belief that national parks are America’s greatest classroom confirmed to me that focusing my fellowship on national parks would have the most impact on my students.”

Cassie traversed Grand Canyon National Park (north and south rim), Bryce Canyon National Park, Grand Teton National Park and Yellowstone National Park. Across each location and in six states, she filmed video to create virtual field trips to be shown in the classroom. She also took advantage of Ranger-led walking tours, programs provided by naturalist guides, and a mule ride along the eastern rim of the Grand Canyon. In addition to observing geothermal and geological formations, Cassie studied petroglyphs and pictographs on Newspaper Rock to build a lesson around Ancient Native American peoples.

You can see photos of Cassie’s experience on her Instagram feed @PierceAndParks.

“Through this fellowship, I will be able to put into practice my belief that the most effective way to teach social studies is with first hand knowledge,” said Cassie. “The way to make curriculum meaningful and personal for my fourth graders is to put it in a real world context infused with excitement and adventure.”

Cassie believes the clearest benefit to her social studies students will come in the form of reworked lesson plans that are more engaging and interesting. She also knows her “being there” will make the wonders of national parks real for them. 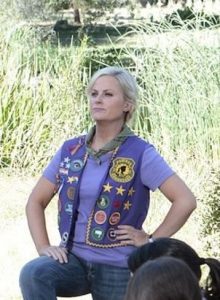 “My students might not ever see a geyser or ride a mule into a rocky canyon, but they will know someone who has,” said Cassie. “Often, as educators, we teach our students information straight from a resource book or textbook teacher edition. Now, my teaching of the Southwest and West region of the United States will be more than rote facts and small snapshots. My trip will fuel their desire to set out and experience our national parks for themselves one day.”

Cassie, in the words of the Pawnee Goddesses motto: “You’re freaking awesome!”

Cassie Pierce is a a fourth grade social studies teacher at Deer Creek Prairie Vale Elementary School in Edmond, Oklahoma. Her main goal in the classroom is to instill the love of learning in all of her students because she believes it will equip them for lifelong success. Recent achievements include initiating and leading a monthly after school STEM program and site Teacher of the Year.