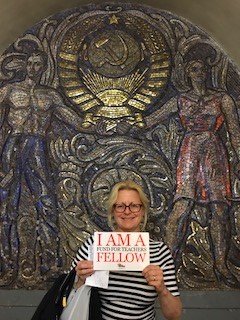 The Politics of Music

As tensions heated up this summer between Russia and the United States, Kathy Morse served as a self-appointed ambassador of education, researching the arts in St. Petersburg, Novgorod and Moscow. She returned to ACES Wintergreen Interdistrict Magnet School in Hamden, CT, with insight into how the arts plays such a vital role in Russia’s past and present culture and shares a few of her experiences below… 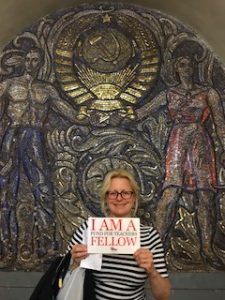 Before leaving on my fellowship, I asked my fifth graders to journal their impressions of Russia. Their input framed my research, which I will now use as the foundation for their sixth grade social studies class. Together, we will now look at our diverse world through the common lens of art, specifically, the music, dance and architecture I experienced with my Fund for Teachers grant.

For three weeks, I observed how culture is a driving force in Russia. In St. Petersburg, also known as “Venice of the North,” I explored the arts, history and geography of the city (the famed music conservatory, the Vaganova Ballet Academy and the State Hermitage Museum) while attending the Stars of the White Nights Festival. Specifically, I dove into the compositional techniques of Dimitri Shostakovich and his inspiration for his Seventh Symphony during the winter of 1941.

Listen to an extract from Seventh Symphony here.

Next, I traveled to a city fixed in time, Novgorod, which lies between St. Petersburg and Moscow. At its peak during the 14th century, Novgorod was one of Europe’s largest cities and was recognized by UNESCO as a World Heritage Site in 1992. Novgorod has maintained itself as a historical center and it is possible to get a glimpse of what Russia looked like hundreds of years ago going back as far as the Middle Ages. This gave me a deeper historical context of Russia.

Continuing on to Moscow, I spent three days exploring the Kremlin, Red Square, St. Basil’s Cathedral, museums and attending performances at the Bolshoi Theatre. These sites are the most iconic, so I wanted students to know what they mean for the Russian people, as well as the importance Moscow plays in our world today. 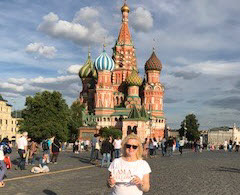 Understanding WWII through the eyes of the Russian People by exploring Victory Park and the Museum of the Great Patriotic War (WWII) in Moscow was an extensive history lesson. This country lost more than 25 million citizens to battle, starvation, disease and Stalin’s Terror.  The museum also emphasizes the important role the United States and other Allies played in securing victory over Nazi Germany.

Using the Lincoln Center Education model of inquiry (practicing skills like noticing deeply, posing questions, making connections, and empathizing), my students and I will now be able to explore the Russian culture through the study of the arts of St. Petersburg, the history of Novgorod and the political importance of Moscow while making real world connections to other curriculum areas including literature, history and geography. If we Westerners hope to understand this enormous country, we might intelligently begin by trying to understand the culture which drives this mysterious country. That’s where we’ll begin in my class.

Kathy Morse (pictured in a Moscow subway station) graduated from Duquesne University with a degree in Music Education/Music Therapy while pursuing her passion of performance on the
French Horn.  Her first job was with the State Orchestra of Mexico. Upon returning to the United States, she earned her Masters Degree from Yale University and toured world wide with various ensembles. She has carried her passion for music into the classroom for the past 26 years and has led teacher workshops for Carnegie Hall and the New York Philharmonic.