He’d Like to Teach the World to Sing — Opera

You might not know that October 25 is the birthday of Georges Bizet (composer of the opera Carmen) and Johann Strauss II (composer of multiple operettas). Or that today is World Opera Day, the fourth year in a movement to increase awareness of access to opera. Perhaps most surprising of all, one of our grant recipients designed a fellowship around OPERA.

Lucian Guilmette (Meriden, CT) crafted a fellowship to attend the Ancient Greek Music seminar in Riva del Garda, Italy, research the origins of opera in Florence, and the later development of opera and origins of antiphonal polyphony in Venice, to facilitate teacher collaboration across disciplines and increase student engagement through the use of authentic materials and deeper context. Why did a high school music teacher choose opera as his focus?

“Our western musical tradition, like so much of our culture and society, can be traced back in a direct line to the music that was studied and practiced by Greek philosophers, poets, and musicians in the fourth, fifth, and sixth centuries B.C.” said Lucian. “Like most music teachers, however, my formal training in musical history is very scant before the year 1700. I have done what I can to fill in the gaps in my own education, because I recognize how important it is to be able to draw a solid line from the past to the present, whether my students are studying the theory or the history of music or musical theater.” 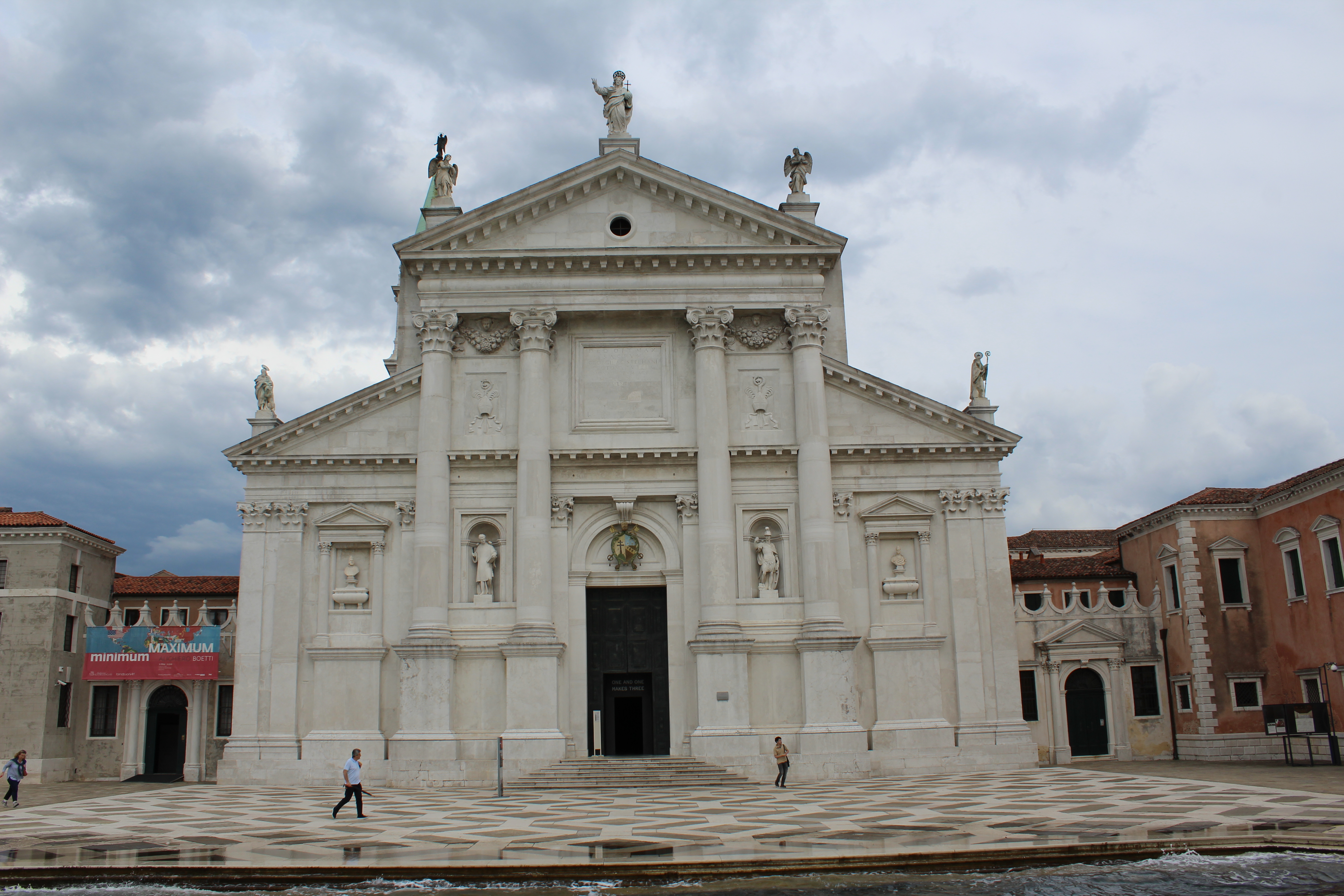 The Church of San Giorgio

My fellowship was indeed an amazing experience.  One night in Venice I went to the church of San Giorgio. I had heard that the monks there sing vespers every night, and it was my hope to be allowed to listen to Gregorian Chant sung by those who truly understand it and do it the way it is supposed to be done. Imagine my surprise when the abbot handed me a missal and invited me up with them! It seriously taxed my language and music skills, but I participated fully. It was a profound and moving experience.

In the conference room in Riva del Garda. The students and professors I met here are some of the most intellectually accomplished people I have ever known.

In addition to singing with the monks, I also attended two operas–La Traviata in Venice, the city where it had premiered, and Barber of Seville in Florence in the Pitti Palace, site of the very first opera performance ever, back in 1597.  But the centerpiece of my fellowship was the week I spent in Riva del Garda attending a conference on ancient Greek music.  That conference was made up of the most important figures studying ancient music today.  For example, when I was in college, we learned that while we had surviving examples of written music from ancient Greece, no one could read the symbols and therefore we didn’t know what that music actually sounded like.  Well, in the intervening years people have indeed deciphered those symbols–and those people were at the conference!  Much of the conference was over my head–I was by far the least knowledgeable, least educated person in the room.  I was amazed to watch, for example, a young Italian graduate student asking questions in English about a book she was holding that was written in ancient Greek, then making notes in the margins in Italian (as she was receiving answers in English). 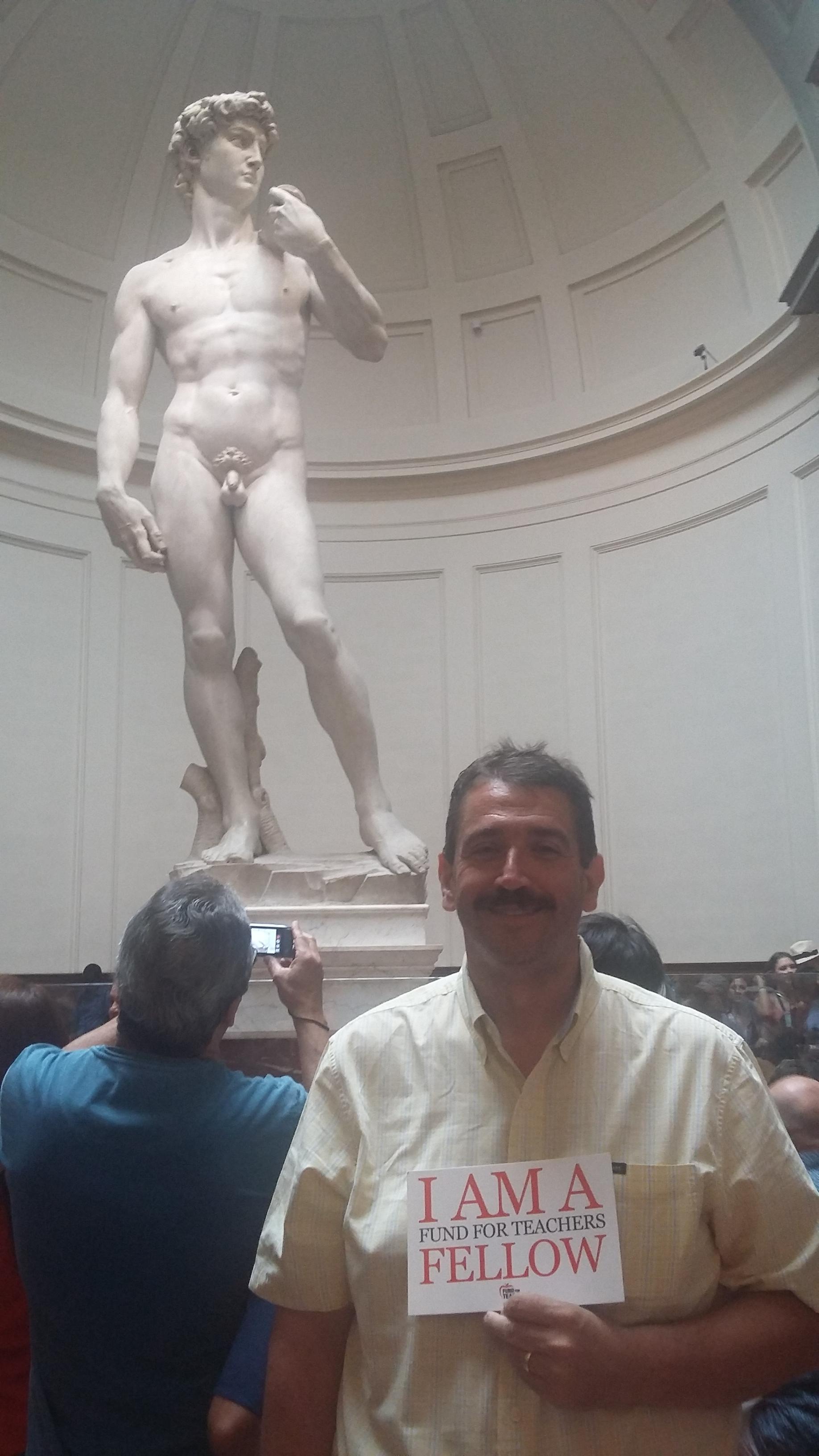 At the feet of David–it was amazing to see so many fabulous works of art!

I did learn quite a bit however and came back with a much more solid grasp of how music worked, both technically and philosophically, in the ancient world.  I was able to do two things with that–on one hand, I injected that material directly into the college-level class I teach in Music History.  On the other hand, I was able to give a Professional Development session (both well-attended and well-received) on the lessons we can draw from the Greek approach and utilize in our classrooms today.

The biggest change for me is that beginning in the fall of 2021 I now teach primarily mathematics at my school.  I didn’t change schools, just departments!  And while I am now primarily a math teacher, I still teach a college-level music class every year and still incorporate what I learned during my fellowship.  I should also mention that I know of three other fellowships that happened fairly directly because of mine–two different ones by other teachers in my school and one by my cousin who teaches in a different school.  It was a very rewarding experience to assist those people with their applications and to see them be awarded the fellowship and then be able to have their own experiences.

Now that the five-year window has gone by, it is very much in my mind to apply for another fellowship.  Now that I am teaching math, I am exploring areas where I may be able to gain some deeper understanding of my subject area, and perhaps before long I will be off again!