Meeting Lord Byron amidst the fog in Aberdeenshire.

Fans of the movie Twilight fall into one of two categories: Team Edward or Team Jacob. Students at Ossie Ware Mitchell Middle School in Birmingham, AL, support a third option: Team TSV (Teachers Seeking Vampires). This team, comprised of a science, a history and an English teacher, will research vampire legends across the British Isles’ this summer, to inspire students’ interest in reading.

“For 20 years, I’ve taught in an inner-city school and I’ve never witnessed this level of reading apathy,” said LaVerne McDonald, history teacher and team lead. “After telling students what to read for all those years, I turned it back on them and asked what they wanted to read. ‘Vampire stories’ unanimously topped the list. I decided if I could use vampires to get their attention, then I automatically get their interest and the war is won.” 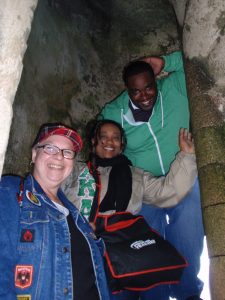 Climbing the tower at Slains Castle, the inspiration for Stoker’s Dracula

Consequently, Team TSV heads to England, Ireland and Scotland in July, bringing to light the cultural influences and historic sites associated with Western literature’s vampire legends. By observing the geography and locations featured in works by John William Polidori, Bram Stoker and Lord Byron, the team becomes primary sources for their students and, hopefully, catalysts of positive reading habits.

“I knew about Fund for Teachers, but Alabama teachers were never eligible – until this year,” said LaVerne. “We figured those reading our application would think we were crazy proposing a vampire-themed fellowship. But that’s what the students wanted, so that’s what we wrote. The beauty of Fund for Teachers is that we could choose what we wanted to learn, as opposed to being told what to learn.”

Community support leading up to the teachers’ departure encouraged LaVerne that they were onto something. Features by the Birmingham News and local ABC affiliate, in addition to accolades from the Alabama Board of Education, buoyed their excitement. The only negative response came from former students, who complained about missing out on the experience. According to LaVerne, every world culture, beginning with the earliest civilizations, incorporate some form of vampire legends, making the topic ideal for world history curricula. Stephen Howard, science teacher, plans to lead student inquiry into the biological ramifications of vampires’ habits (digesting blood and jumping great distances); English teacher Phylecia Raglund will guide students’ reading of Stoker’s Dracula, Lord Byron’s poem “The Giaour” and lesser-known works of Polidori, credited by some as the creator of the vampire genre of fantasy fiction.

“Naturally, as an educator, I want students’ reading scores to go up, because success in any subject depends on one’s ability to read. But as a person who loves children and wants them to succeed in life, I want them to enjoy reading,” said LaVerne. “If vampire stories hook them on reading, then so be it.”

For more on this teaching team, watch this piece produced by the Southern Education Desk.