August 9th marks the first meeting of the United Nations’ Working Group on Indigenous Populations in 1982 and the occasion designated by the UN General Assembly for honoring 370 million Indigenous People living across 90 countries who remain subject to political, economic and social oppression.

Indigenous People are defined as ethnic groups originally in a territory prior to being
incorporated into a national state, and who are politically and culturally separate from the majority ethnic identity of the state that they are a part of.

This summer, fourteen Fund for Teachers Fellows chose to research Indigenous People on three continents to increase student awareness and appreciation of the history, culture and challenges faced by those also known as first peoples, aboriginal peoples and native peoples. Read on to see how these teachers pursued knowledge of and experience among these inheritors and practitioners of unique cultures and ways of relating to people and the environment.*

Charles FitzGibbon and Christine Faye Dunbar (Metropolitan Expeditionary Learning School– Forest Hills, NY) used photo journalism and oral interviews to examine the immediate effects of climate change on coastal Alaskan natives. They plan use their research to convey to students the interaction between individuals, communities, government policy and the climate. 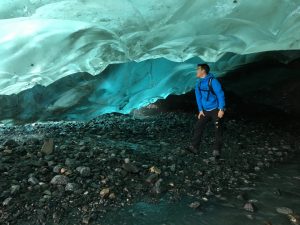 “We are two teachers from a public 6-12 school in Queens, New York, who are traveling this summer to Alaska on a research grant from Fund for Teachers. We’re passionate about the work we engage our students in, and strive to make learning as relevant and real-world as possible. Our mission this summer is to research the impacts of climate change on coastal
communities, particularly those in the arctic region who are facing the more drastic effects of warming temperatures, melting permafrost, and land erosion. Namely we seek to answer three key research questions:

What challenges do coastal Alaskan communities face in the age of climate change?

How do borders ensure, enshrine, and entrap the communities of coastal Alaska?

What can be done to preserve and affirm the cultures of indigenous peoples as climate change threatens the future of their communities?”

For 21 days, Christine and Charles explored Juneau, Nome, Shishmaref, Fairbanks, and Prudhoe Bay, providing a broad scope of how climate change is impacting the state, its economy and social fabric. Click here to see what they discovered.

Glen Meinschein, Greg Gentile and Alejandro Avalos (Brooklyn School for Collaborative Studies) investigated of one of the most controversial figures in Mexican history, “La Malinche,”
by exploring across Mexico themes of colonialism, feminism and indigenous history to engage students of different backgrounds and support their academic achievement.

This blog documents their experiences, characterized by the sentence, “It was unsettling how much of our investigation of her has resulted in silence, shrugs or lack of any answers or any significant information.” Learning about the Huran Wendat tribe on the Wendake Reservation.

Renee Lukaniec (Fox Run Elementary – Norwalk, CT) was handed a curriculum, outdated textbooks and asked to teach a unit on Native Americans three years ago. The search for authentic information and artifacts inspired her Fund for Teachers fellowship living and learning on the Huron-Wendat Nation reservation in Quebec. Read more of her experiences here.

Michelle Broxterman and Rachel Southard (Westside Elementary – Pittsburg, KS) chose to investigate with their Fund for Teachers grant the Mashallese people, culture and environment because their classes increasingly welcome immigrants from the cluster of small islands in the Pacific Ocean. Despite the contingency of immigrants living in their small town, the teachers found that many people have no idea where the Marshall Islands are. Their goal is to reach, teach and assimilate Marshallese students and families – and to educate the community about their new neighbors. In their grant proposal, Michelle and Rachel wrote:

“The Marshall Islands face numerous obstacles resulting from global warming and continued effects of nuclear testing. According to scientists, the Marshall Islands could be underwater within our lifetime. These looming threats have resulted in a mass immigration of over 20,000 Marshallese people living in the US. Although there has been a large influx of Marshallese people, their language and culture are relatively unknown and seem to be gradually disappearing along with their islands. We feel an urgency to gain as much information as we can now because later may not be an option.”

Rachel and Michelle checked in after their fellowship:

Our fellowship took us to Majuro, the capital of the Marshall Islands, for an amazing experience. We were able to ride on a traditional Marshallese canoe, sample local foods and gain a deeper understanding of the nation’s history. In addition, we studied the Marshallese educational system and toured an elementary school.

The most meaningful part of our fellowship was spending time with the people. We were welcomed with open arms by relatives of our Marshallese students. They ensured that we were able to learn a large amount of
information in a short period of time. It was obvious that generosity, caring, resilience and hospitality were and continue to be key attributes in the Marshallese culture. It is our hope that from our fellowship, we will help our Marshallese students to be proud of their heritage and continue on their traditions.

Click on the following links for further research accomplished by previous Fund for Teachers Fellows on:

The ‘Namgis
The Maori

The Aborigines
The Lakota Sioux, Blackfoot and Salish Peoples

The Zapotec
The Navajo, and